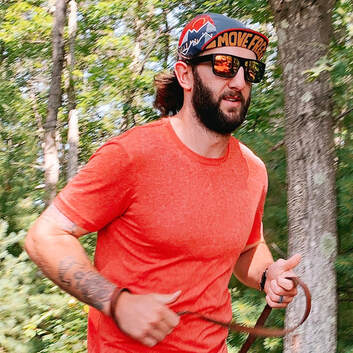 Massachusetts
What moves you? I love to see people pushing their limits and getting out of their comfort zone. Setting crazy goals and chipping away at them. This doesn’t just mean professional athletes setting course records but for everyday people who maybe have never run and set a goal to run their first 5K. This may not be a “crazy goal” to some people, but that’s not the idea. The idea is to personally conquer your fears or doubts. Having a dream and pursuing it. When I see people “getting after it,” it really motivates me.

How does running inspire you to give back? Running has become my therapy. I hit rock bottom about five years ago. I was on a self-destructive path, and it probably wouldn’t have ended well if I continued living that way. I discovered running as an outlet for all the feelings I had to face through the process of self-help and self-healing. I used to drown my sorrows with alcohol and drugs, but running has become my new addiction. On a run, I had an idea to spread the positive benefits of running and turn it into a group run/therapy session. I was inspired by not just my own road to recovery but others who had similar stories. Come to find out this idea had already been conceived by the founder of the Boston Bulldogs Running Club! I don’t get to run with the Bulldogs much, but I still spread their message and tell everyone who will listen how running has helped me in hopes to inspire others to get out for some trail therapy.  Running has inspired me just to be a better person in general, and I’m continually finding different ways to give back. Whether it’s spreading the therapeutic benefits, cleaning up my neighborhood while running or protecting the nature we all treasure.